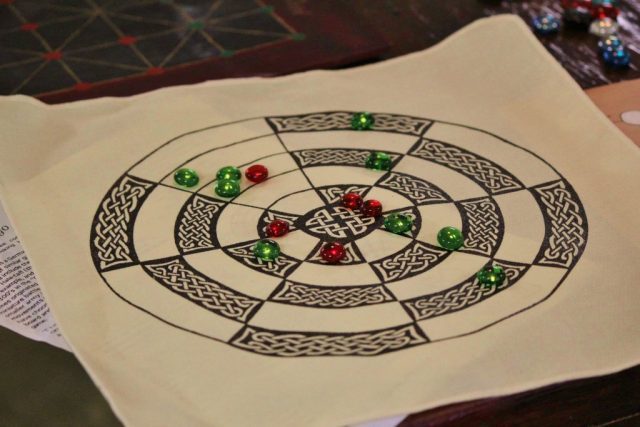 Many of the board, card, and dice games that are played today have roots in the Middle Ages!

Board, Dice, and Card Games

The history of games goes back to the ancient civilizations, but games really blossomed in the Middle Ages, and they’re some of the favorite activities we do in the Society! At any given event, you are likely to come across people playing simple games using tokens, gems, or even stones from the ground! One of the most prevalent categories of games from the Middle Ages is called “Morris” games. You may have already played Nine Men’s Morris or a variation of it in the past. This game is actually over a thousand years old!

The ability to learn and play a game that has been played for thousands of years makes history seem that much more alive to me. It makes my SCA experience more real, more tangible. It’s even more fun when I win! — Lady Cynewise at Shadowed Wood 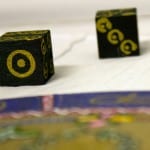 In addition to these simple games, a lot of card and dice games that are still played today were inspired by games from the medieval world. There are medieval equivalents to the modern card games of Poker and Blackjack, as well as assorted trick-taking games reminiscent of Hearts and Bridge. Dice games range from like Gluckhaus where each roll earns or loses you points to complex rolling games based on probabilities like Hazard. While we always simply play for fun, the competitive nature of the average Society participant makes each roll of the dice a spirited moment!

Board games are also a popular pastime in the Society. Chess is the ubiquitous medieval board game, with dozens of variations played in every corner of the world. There are dozens more different games from simple games like Checkers (Draughts) to more detailed games like Tafl and The Game of the Goose, which formed the basis of many modern games, all of which can be found played at many events in any kingdom.

In addition to traditional board, dice, and card games, several other common games and hobbies began and evolved in the Middle Ages and are played in the Society. For as long as kids have been running around, they’ve been playing tag games and other physical sports! Many of our outdoor events give kids (and often adults) an opportunity to try out these sports. You’ll also frequently see Society participants juggling, performing medieval magic tricks, and more.

If you’re interested in learning more about games and pastimes or trying them out, contact the Arts and Sciences Officer of your nearest branch to find out when and where classes and workshops are held!